Flowerhorn cichlids are ornamental aquarium fish noted for their vivid colors and the distinctively shaped heads for which they are named. Their head protuberance, or kok, is formally termed a “nuchal hump.” Like blood parrot cichlids, they are man-made hybrids that do not exist in the wild.First developed in Malaysia, Thailand, and Taiwan, they became very popular with Asian fish hobbyists. They are also kept by hobbyists in the US and Europe, but their importation is banned in Australia. Some hobbyists[who?] have questioned the impact of flowerhorn breeding programs and their impact on the health of the animals, and on natural fish species.

Flowerhorn breeding dates from 1993.[1] Malaysians admired fish with protruding heads, known as Kaloi or “warships,” found in the western part of the nation. The slightly protruding forehead and long tail of these fish were prized in Taiwanese society as bringing luck in geomancy. By 1994, red devil cichlids (typically Amphilophus labiatus) and trimac cichlids (Amphilophus trimaculatus) had been imported from Central America to Malaysia and the hybrid blood parrot cichlid had been imported from Taiwan to Malaysia and bred these fish together, marking the birth of the flowerhorn.[dubious – discuss]

In 1995, the blood parrots were further crossbred with the Human Face Red God of Fortune, which produced a new breed called the Five-Colors God of Fortune.[1] With its beautiful colors, this fish quickly became popular. Selective breeding continued through 1998, when the Seven-Colors Blue Fiery Mouth (also known as Greenish Gold Tiger) was imported from Central America, and crossbred with the Jin Gang Blood Parrotfrom Taiwan.[1] This crossbreeding led to the first generation of Hua Luo Han flowerhorn hybrids, which were then followed by subsequent flowerhorn introductions. 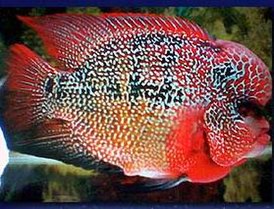 The genuine Golden Monkey (also called Good Fortune) or Kamalau was bred by Mr. Lam Seah and Lam Soon in Bercham, Ipoh, Malaysia. After the third generation, all of them were sold to the A-1 Aquarium in 2001. This type of flowerhorn is an original Luohan-based fish and not a mixed type Zen Zhu or Kamfa.[1]

It can be a particularly expensive flowerhorn, carrying a price tag of more than one thousand dollars. The most expensive Golden Monkey was sold for 600-thousand dollars during a Malaysian exhibition in 2009.[citation needed] 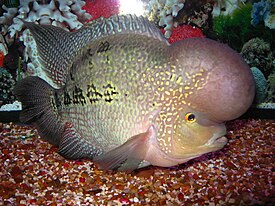 This breed originated from the Luohan. Its main characteristics are white or yellow eyes (red eyes are possible but not common), a fan tail, a water-colored head bump, sunken eyes, and smaller lips than the Zhen Zhu. This breed generally also has a larger and more square body than that of the Zhen Zhu. Head flowers can be found on the Kamfa, but not as prominently as with Zhen Zhus.

This breed originated slightly after the Kamfa, derived from the Luohan. It has a rounded tail, large mouth, red protruding eyes, and a prominent head flower. Zhen Zhu means “pearl flowerhorn.” This breed’s strongest characteristic is pearling. Breeders often cross other types with Zhen Zhus because they breed easily and can create better pearling for the next generation. Weak tails can also carry over, however.[1] 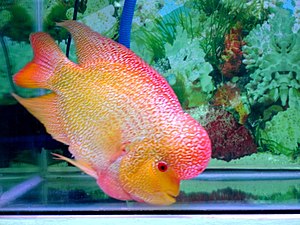 Faders are called by that name because during the juvenile period of life they lose their color and go completely black. As the fading process continues, the black “fades” away, leaving a more vibrant and beautiful color, usually yellow or red. They are also referred to as golden base or Golden Trimac.[1]

Red Texas cichlids are related to the golden base family of flowerhorns. They were originally created by breeding a green Texas cichlid with a Mammon or King Kong parrot, then crossing the offspring back to the parents until a consistent red color was achieved. Hobbyists consider the most important feature of the red Texas to be the color. Red Texas cichlids range in colors, and are rated as:

The second characteristic that sets the red Texas apart is the pearling. Red Texas can vary greatly in terms of the type of pearling.[1]

From the Kamfa family, this fish typically has white or yellow sunken eyes, although red eyes are possible but rare. Distinctive features of this breed include an intense black double flower row along the lateral line, and very thick white pearling. Originating in Thailand, this breed has seen a recent rebirth in Vietnam. The body is typical of a Kamfa, with a fan tail, and a longer body than some other Kamfas.[1] King Kamfa is the most expensive flowerhorn strain.[citation needed] 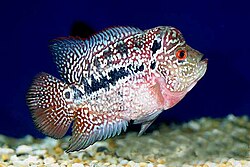 This is a cross of a Kamfa male and a Malau female. The body and face resemble a typical Kamfa (see above). The finnage and sunken eyes reflect the Kamfa genes. The main feature of a Kamfamalau is the pearling. Fins typically take on a “frosted” pearl look that is rarely found in any other breed of flowerhorn. Pearling usually crosses all the way across the head bump, another rarity in flowerhorn breeds. This breed should display the best characteristics of both Kamfa and Malau.[1]

The Thai Silk, also known as Titanium, is a relatively new breed. This flowerhorn breed is almost completely metallic blue, gold, or white. Its origins are unclear. A new strain of Thai silk has been developed that has a kamfa-type body and red, blue, or white eyes

A strain is a more specific subset within a particular breed. Strains can get as narrowly defined as all coming from one individual parent fish. Strains can also differ by country of origin and by breeder.

Created by Ah Soon of Malaysia, these fish are characterized by a large stocky body, as well as metallic pearling.[1] 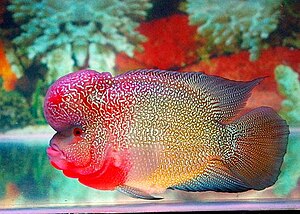 These were created by the Indonesian Luohan Club (ILC), using a Golden Monkey (or Malau) female and a Zhen Zhu male. The second generation was spawned from the Elvis selection and a Golden Monkey female. The strain is characterized by extensive pearling all over the body, face, and head. What distinguishes anIndoMalau’s pearls from that of a Zhen Zhu or a King Kamfa is that they are extremely fine. As the fish ages, the pearls become more intricately woven and thinner. Flowerlines vary dramatically; some only have a few flower spots. Most ILC IndoMalaus will include some singular flowers on the back line or “top row.” The front half of the fish, from the pectoral fins forwards, is red. The back half is a golden gradient intensifying in color towards the tail. The body is very wide and high, a throwback to the original Luohan. There is a very pronounced chin or “gobbler.” The head is usually forward-protruding. The tail is fan-shaped, close to that of a Kamfa. The dorsal and anal fins lack trailers, a common trait found also in Zhen Zhu. The caudal peduncle is very large and pronounced in this strain [1] 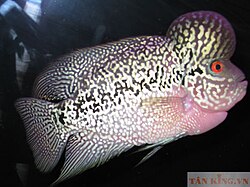 This strain was created by Mr. Tan of Vietnam, by crossing a Zhen Zhu with a Kamfa. It has pearls and a flowerline like a King Kamfa, but the body and fins are more closely related to the Zhen Zhu. Most have protruding eyes and a more rounded tail like a Zhen Zhu.[1]

Strains developed in the United States[edit]

New flowerhorn strains have been developed through breeding programs in the U.S. Although it is hard for the U.S. to compete with Asia’s well established flowerhorn breeding farms, strains with unique genetics have been created.

This is a text widget. The Text Widget allows you to add text or HTML to your sidebar. You can use a text widget to display text, links, images, HTML, or a combination of these. Edit them in the Widget section of the Customizer.

This is a text widget. The Text Widget allows you to add text or HTML to your sidebar. You can use a text widget to display text, links, images, HTML, or a combination of these. Edit them in the Widget section of the Customizer.